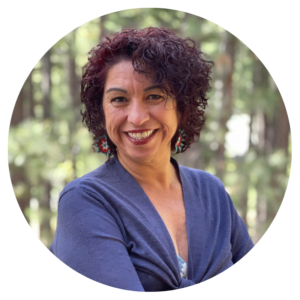 Claudia joined Prospera in August 2014 as a consultant, providing outreach, recruitment, and training services, and in January 2015 she joined the staff as the Training and Capacity Building Director and after as a Program Director. She has been a key member of the Program Team, designing all of Prospera’s new programs. In 2020 she transitioned as a solely Executive Director. She brings her passion for social justice and equality to her role. She has been an active leader in immigrant rights, gender and violence prevention, gay and queer rights, and health promotion for underserved communities for more than 15 years.

Using Popular Education, video editing, and culture, she has served the community by creating plays to denounce and prevent social and health problems. In 2010 she founded the Latino Coalition against domestic and gender violence, La Red Latina that brought together more than 35 organizations that serve, protect and empower Latina women in the Bay Area. Claudia is also an entrepreneur and is the founder of a new cooperative business in the Laurel District of Oakland. As an immigrant woman, Claudia has experienced the challenges that are implied in coming to a new country. With a BA in Communications from el Tecnológico de Monterrey in Mexico, one of the most prestigious universities in Latin America, she worked for almost 10 years in the food industry as a waitress. She recognizes that the immigrant community has a lot of challenges to face but at the same time, she also highlights its strength, power, wisdom, spirit and honesty! Hence, becoming a community worker has not been a choice but a need to demand equality and dignity in oppressed communities.

Spanish
© 2022 Prospera. All rights reserved. ⎜ Made with ♡ by Ilaria Fioravanti
Share This